Why did you choose refractive surgery as a specialty?

“Refractive surgery is much more than a job to me – it’s a passion. It is a tremendous privilege to spend my days combining skills, expertise, and incredible technology in order to make lives better for people. At Kugler Vision, we believe that a life without the barriers of glasses or contact lenses is a better life, and we are dedicated to helping our patients reach their maximum human potential.”

“My ancestors have been in Nebraska since the mid-1800s, and I had the good fortune of growing up in Omaha. Many people may not realize how strong the medical community is in Omaha. We have incredible support, in terms of both economics and expertise, and a diverse economy that benefits from a specialized and customized approach to each patient’s needs. As a destination practice for patients all over the U.S., the centralized location is also convenient for patients traveling from outside the area.

I feel a strong sense of obligation to give back to the state and community that has given me so much. My wife and her family are also deeply involved in the community, so we feel fortunate to have the opportunity to raise our family here as well. These factors combined made Omaha the obvious choice.”

Have you had refractive surgery yourself?

“Yes. I had fairly bad nearsightedness for most of my life. I had LASIK in both eyes and it was an absolutely transformational experience. My wife also had laser surgery and agrees it is one of the best things she has ever done.”

Dr. Kugler serves on several national boards, and Kugler Vision is recognized internationally as a center of excellence. Alongside co-founders Dr. Jason P. Brinton and Dr. Greg Parkhurst as well as fellow Dr. Luke Rebenitsch, Dr. Kugler is a founding member of the Refractive Surgery Alliance (RSA). He was the first president and continues to serve on the executive board. As a world-wide organization made up of 300 of the leading LASIK surgeons from around the globe, the RSA espouses a positive agenda of ethical refractive physicianship, state-of-the-art equipment and post-treatment longevity. Dr. Kugler strives to ensure that these values carry through to both his staff and his entire practice for each and every patient in the Omaha area. He also serves as the RSA’s liaison to the American Refractive Surgery Council.

Dr. Kugler and his wife have five children, which take up the majority of his time. When he does find a free moment, he enjoys skiing, tennis, golf, traveling, fine coffee, and craft beer.

He then went on to earn his MD from Case Western Reserve University School of Medicine in Cleveland, Ohio. After graduation, he returned to Omaha for residency training in ophthalmology at the University of Nebraska Medical Center. Following residency training, Dr. Kugler entered private practice.

After practicing ophthalmology in the Omaha area for four years, Dr. Kugler decided to embrace his passion for refractive surgery and began the process of forming Kugler Vision. Read more about the practice history here.

The Outstanding Senior in Computer Science, (1997)

Young Ophthalmologist (YO) subcommittee member, YO Info Board, 2008-2010

Psychometric Validation of the Visual Symptoms Associated with Refractive Correction 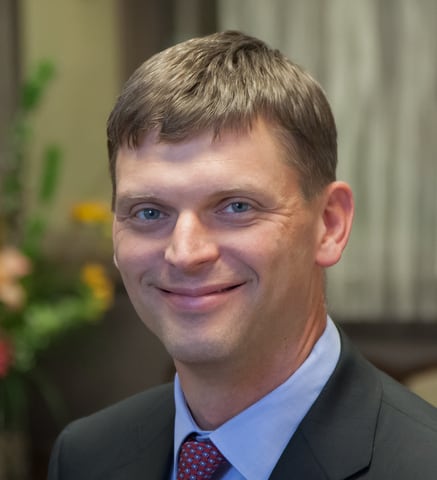 Lance Kugler, MD is the Founder and Physician CEO of Kugler Vision in Omaha, Nebraska. Following a year of specialty training, during which he performed over 1300 refractive surgical procedures, Dr. Kugler returned to Omaha to bring the latest state-of-the-art LASIK and cataract surgery technology to Nebraska. Dr. Kugler serves as Director of Refractive Surgery for the University of Nebraska Medical Center, where he is in charge of resident education and research programs to advance the field of refractive surgery.